Fixed income gets more than half of inflows in July

The mutual fund industry had net inflows of R$43.4 billion in July, bringing the year-to-date amount to R$296.4 billion. The Fixed Income class was again the highlight, accounting for more than half of funds allocated in the period (R$28.4 billion), helped by R$13 billion added to the Short Duration Sovereign type. The subcategory includes funds that seek returns by investing mostly in fixed-income assets adjusted by the DI floating rate (Interbank Deposit) or the Selic. Meanwhile, the ANBIMA indexes pointed the IDA-DI (0.66%) and IMA-S (0.45%) as the ones with the highest returns in July, confirming their good momentum. 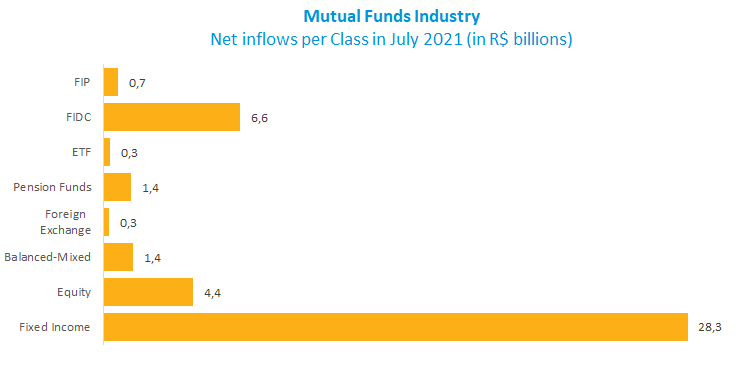 FIDCs, or Credit Receivables Investment Funds, received net inflows of R$6 billion and R$62.2 billion in July and in the year, respectively. Among types, investors added R$6.1 billion to the Agribusiness, Industry and Commerce in the month. The result reflects nearly R$6 billion in inflows to the most representative fund within the subcategory.

The Equity class comes next, with net inflows of R$4.4 billion in the month and R$5 billion in the year. Among types, the Foreign Equity Funds lured the largest amount in July (R$2.1 billion), totaling R$20.7 billion in the year. The exchange rate is one of the factors that weigh in allocations to this subcategory, and the net result for July was in line with the dollar’s gains (2.39%) for the period.

Balanced-Mixed Funds added R$1.43 billion in July, reaching R$92.8 billion in 2021, a year-to-date amount that is second only to the Fixed Income class’s. Like in Equity, funds focused on foreign Investment were the highlight, bringing R$2.1 billion in July and R$108.6 billion, respectively.

As for returns, among the Fixed Income’s subcategories, 14 of the 16 types had gains, reaching an average gain of 0.74%. In the Equity class, only foreign funds were in positive territory (0.32%), with the remaining 11 showing losses, in line with the Ibovespa’s 3.94% drop in July. The Balanced-Mixed - Specific  Strategy stood out, gaining 1.39%.