Equity funds faced R$12.8 billion in outflows in March but in the month’s last session the Ibovespa, Brazil’s stock market benchmark, broke above the 120,000-mark for the first time after seven months, driven by gains in commodities and more foreign investment flows flocking to B3. In the first three months, the Equity class lost R$31.8 billion, led mainly by outflows of R$25.2 billion in the period in the Equity – Free Portfolio.

The fund industry’s portfolio shows that allocations to debenture rose near 54% in February from a year ago – the latest data available – while equity instruments saw a 5% decline. Demand for fixed-income instruments is stronger among mutual funds, which have reduced exposure to equity assets amid higher interest rates. 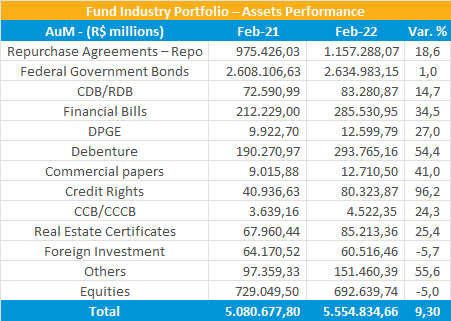 In terms of returns, the Fixed Income - Long Duration Sovereign gained 2.64% in March – the most among the class and above their benchmark IMA-Geral (1.57%). In the Equity Class, Small Caps delivered the biggest return, with a 7.7% gain. In the Balanced-Mixed, the Macro type was the best performer, rising 3.96%.