Capital market raises R$150 billion in the first half

In an atypical first half due to the pandemic, capital market funding dropped 13.6% to R$150.1 billion compared with R$173.8 billion in same period a year ago. Debentures accounted for the lion’s share of the total raised at 32.4%, followed by secondary share offerings (follow-ons), with 21.7%. The capital market raised R$23.9 billion in June, more than double from the R$10.6 billion in May. 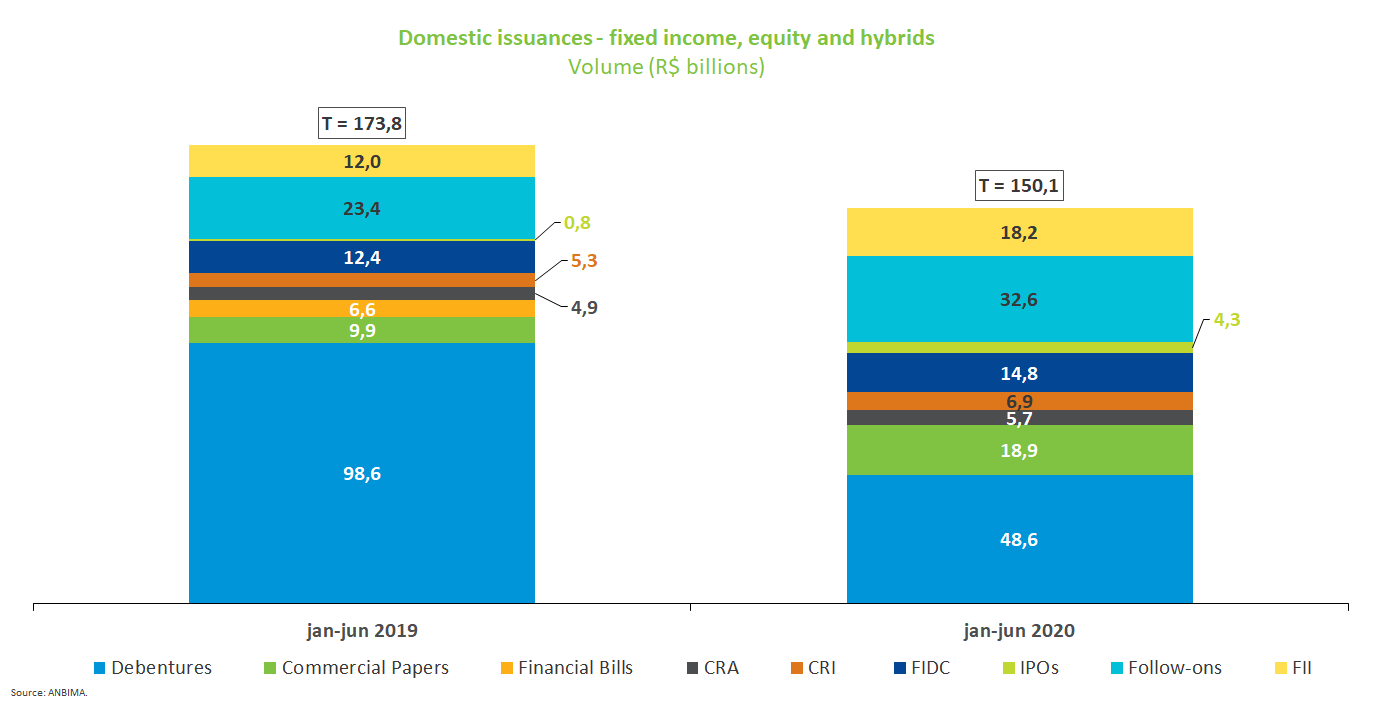 The uncertain environment compromised the pace of issuances and impacted placement profile in the first half, reinforcing the need for cash and shorter-term securities. Issuances of commercial papers, shorter-term securities, stood out especially when the crisis hit, and represented 12.6% of the total in the first half versus 5.7% in the same period a year ago. In April alone such securities’ share accounted for 39% of the amount raised in that month.

Debenture offerings totaled R$48.6 billion in the six-month period, down 50% from a year ago. Eighty-seven percent of the proceeds from public offerings went to intermediaries and other participants. Investment funds, which in the first half of 2019 held 59.3% of offerings, saw their share fall to 9%. This trend was already in place early this year before the pandemic, driven by the effects of additional rate cuts on the fixed-income market. 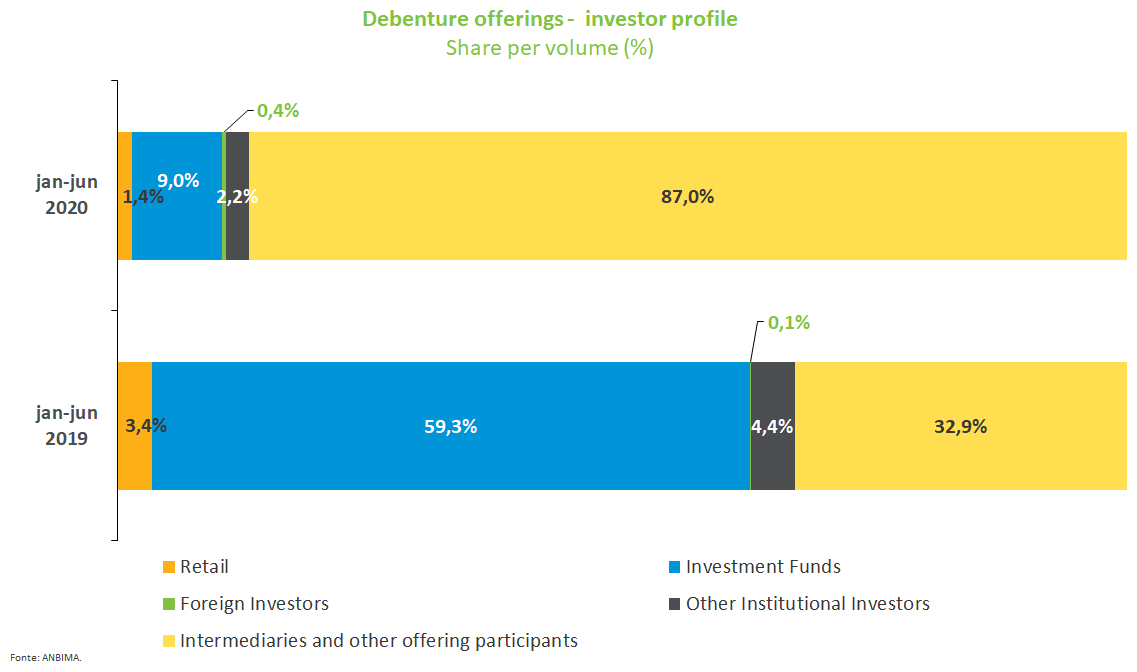 Debenture offerings had shorter maturities in the first half. Securities due in up to three years accounted for 44.9% of the total against 18.2% in the first six months of 2019 while bonds maturing within four to six years saw their slice shrink to 18% from 46.3%. Debenture offerings accounted for 41.2% of the total issued in June, or R$9.9 billion, up 55.3% from the previous month. 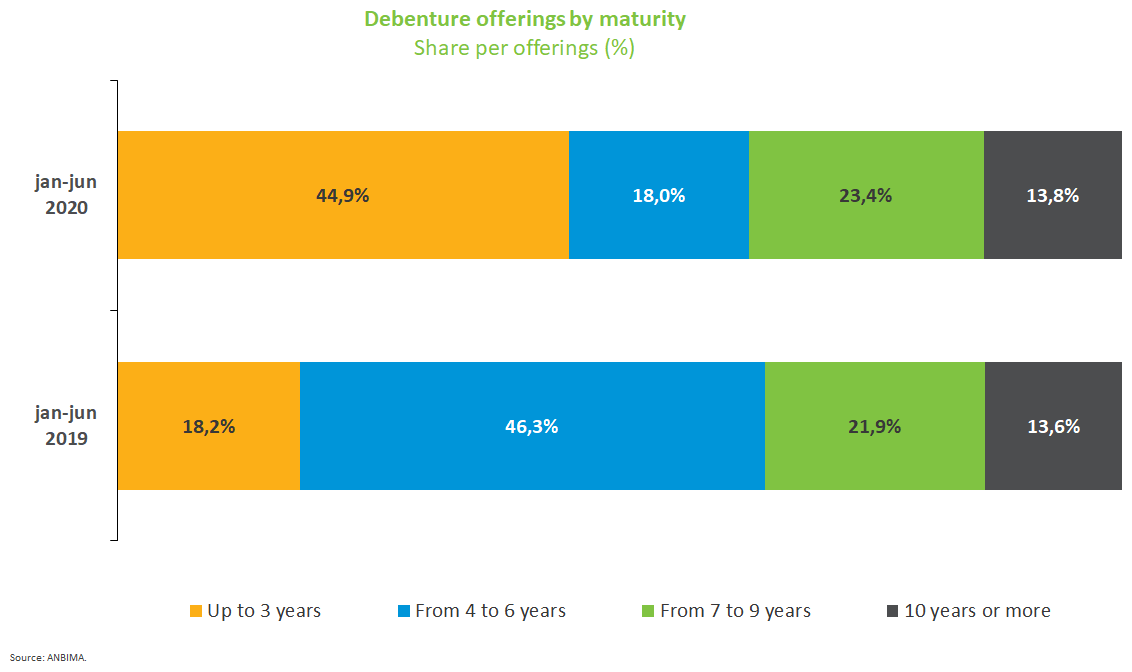 Share offerings accounted for 24.6% of the total issued through June, or R$36.9 billion, from R$24.2 billion in the same period in 2019. Secondary share offerings raised the largest amounts on the equity market in the first six months, totaling R$32.6 billion, even with no such transaction between March and May. As for initial public offerings, they raised R$4.3 billion, well above the R$772 million from the same period last year.

Expectations for increasing share offerings in a context of interest rates at all-time lows will rely on economic growth prospects and investor demand to allocate funds in the segment. Follow-on offerings raised alone R$5.4 billion in June.

Structured transactions of real estate investment funds proved to be resilient to the adverse economic environment, having raised R$18.2 billion in the period, up 51.8% from the first half of 2019 (R$12 billion), which indicates the segment’s growth potential given prospects of economic recovery in the medium and long terms.

There were 13 offerings abroad in the first half, with only one share sale. The fixed-income market raised $14.8 billion while the equity offering R$1.2 billion. The highlights were the sovereign bonds and Petrobras issuances in June, which raised $3.5 billion and $3.3 billion, respectively.