Domestic capital market issuances totaled R$396.1 billion in 2019, 59.3% increase over the previous year. Despite the significant stake, fixed-income assets reduced their participation in the total issued, to 68.2% from 89.1%, due to a higher placement of shares, whose slice rose to 22.8% from 4.5%, in addition to Real Estate Investment Funds, which increased to 9.0% from 6.3%. This move mirrored the 200 basis-point reduction in the Selic policy rate in 2019, which diverted funds to the stock market last year.

In the equities market, the highlight were follow-up offerings, which increased to R$79.9 billion from R$4.5 billion, a 1,500% jump driven by 37 transactions from 3 in the previous year. As for the IPOs, the amount raised 51.7% to R$10.2 billion from to R$6.8 billion. This increase was not reflected in the number of transactions, which rose to five in 2019 from three in the previous year.

Debenture issuances repeated their annual growth trend seen since 2017:  the amount sold rose to R$173.6 billion last year from R$ 153.7 billion in 2018. Institutional investors kept holding the largest share in public offerings, with their stake rising to 53.8% from 51.8%, and average term increasing to 6.5 years from 5.9. The share of debentures issued in 2019 fell from the previous year, to 43.8% from 61.8%, a decrease explained by the relative increase in equity transactions.

The tax-exempt debentures issued under article 2 of Law 12,431, targeted at infrastructure projects, rose to R$33.2 billion from R$21.8 billion, totaling 70 transactions in the primary market last year from 65 in 2018. The average placement period increased to 12.6 years from 10.3. 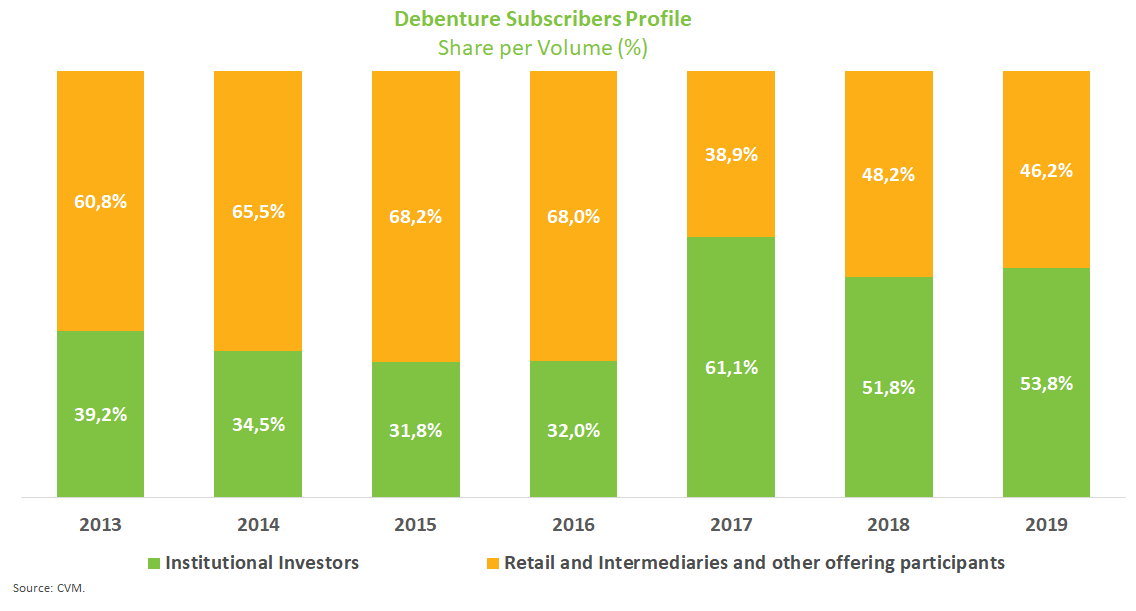 The real estate industry’s recovery boosted transactions with FIIs (Real Estate Investment Funds), especially in the second half. The issued volume more than doubled in 2019 to R$35.8 billion from R$15.7 billion, already accounting for 9% of the total issued in the capital market last year. Individuals continue to be the leading subscribers to FIIs public offerings, with 54.6% of the total placed.

Foreign funding totaled $25.4 billion last year against $15.4 billion in 2018. Of this total, 95% came from bonds and the remainder from equities offerings. The largest 2019 inflows came from a sovereign bond issue by the Brazilian government and another by Petrobras, also a bond sale that raised $3 billion.