In April, issuances in the domestic capital market (not including ongoing public offerings) raised R$9 billion, 55% below the previous month. The year-to-date result through April amounted to R$60.7 billion compared with R$74 billion in the same period last year, equivalent to 180 transactions versus 265 in 2018.

The amount raised via debentures fell 59% from March, to R$4.7 billion. In the year to date, debenture issues also declined, totaling R$29.1 billion, a 37% drop from the R$46.2 billion raised in the same period of 2018. All securities were placed through seven offerings under Instruction N. 476, with the largest volume coming from an issuance of the transportation and logistics segment (R$1.4 billion); three offerings from the power industry (R$1.7 billion); and the rest related to education, finance and communications segments. There was no record of tax-exempt debentures issued through Law No. 12,431.

Institutional investors held the largest share in public offerings of debentures, with 66.7% versus 62.6% in April 2018. In the year-to-date period, these investors accounted for 70% of demand for debentures through Instruction N. 476, and for 37.4% through placements under Instruction N. 400. Meanwhile, individuals held the largest share of the offerings through Instruction N. 400, with 59%. Intermediaries and participating institutions linked to the offering held 26.6% of the total sold compared with 34.8% in the first four months of 2018. 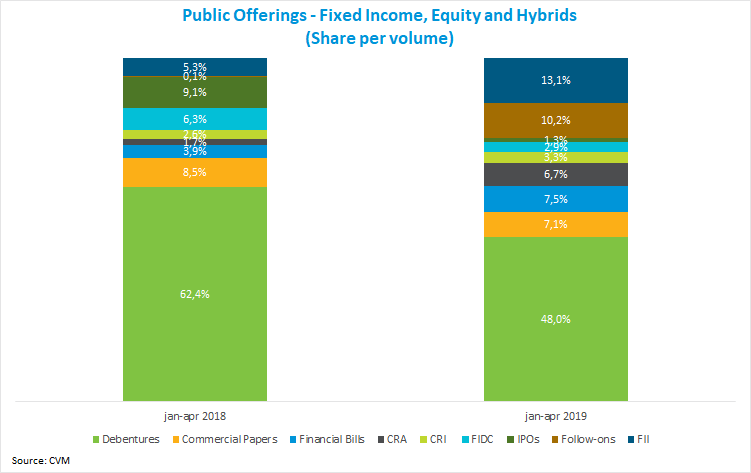 There were three debt offerings in the foreign market, where the highlight was meat processor JBS, which issued two tranches totaling $1.5 billion. In the year to date, the amount issued totals $10.4 billion, still lower than the volume raised in the same period last year ($11.2 billion).