The domestic capital market raised R$164.9 billion in the first half compared with R$130.4 billion in the same period last year, a 26.5% increase, totaling 377 transactions compared with 445 a year ago. The main highlight was the rebound in equity offerings, which raised the highest amount since the beginning of the historical series in 2002. Stock offerings totaled R$29.3 billion: R$4.5 billion through initial public offerings (IPOs) and R$24.8 billion in follow-on offerings. 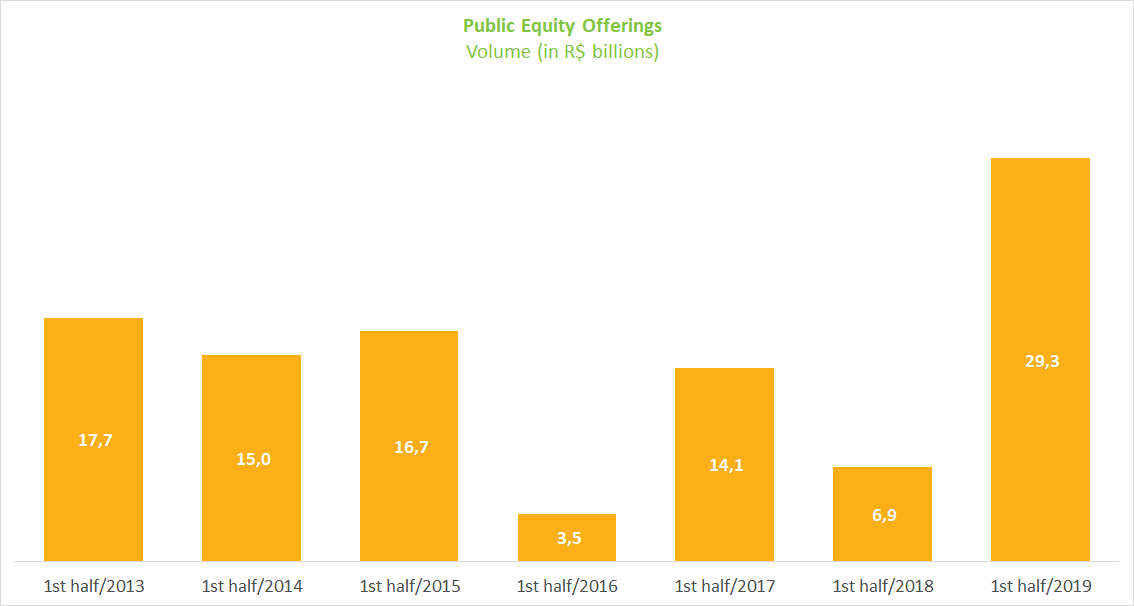 Debentures were the main funding instrument year to date, accounting for 51% of the total raised compared with 59% a year ago. Secondary offerings also stood out: while the transaction volume was very low in the first half of 2108, this year the segment accounted for 15% of the total raised, followed by commercial papers, with 11% from 14% in January-June 2018. As for the number of transactions, debentures held 35% of the total, followed by FIDCs, with 18%. 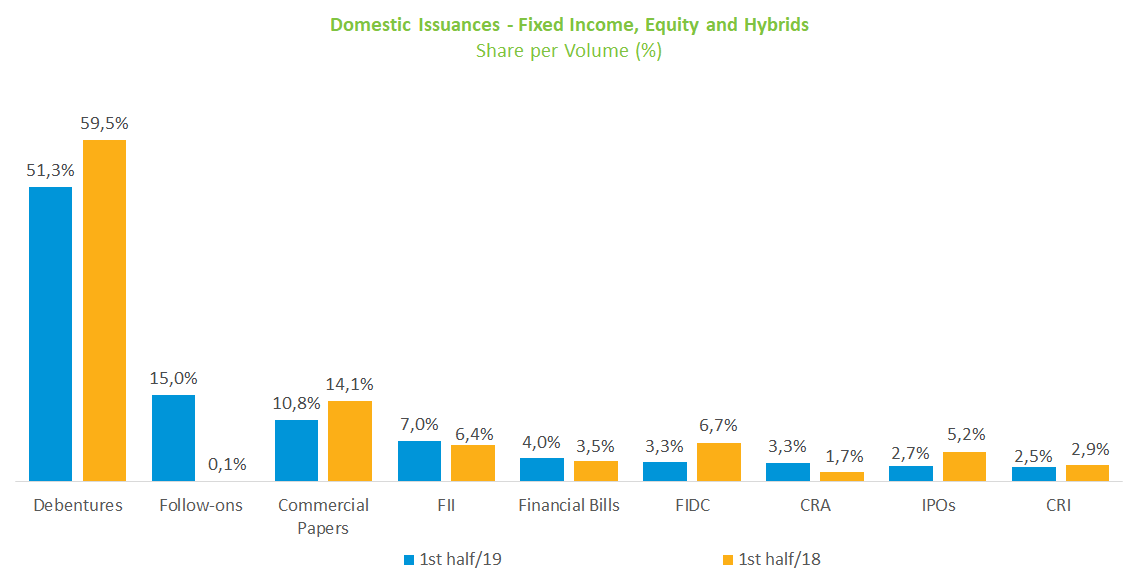 The estimated issuances in the domestic capital markets - which do not include public offerings not closed - fell 18.3% in June from the previous month, to R$33.4 billion. The highlight were the follow-on offerings, which amounted to R$13.8 billion, or 41% of the total raised in the month. IPOs raised R$3.7 billion, or 11% of the total. Regarding the participation in public share offerings in the first half, institutional investors accounted for 52% of the volume placed compared with 41% of foreign investors. In comparison with the same period in 2018, the picture was the opposite: foreign investors held 63.7% of the total compared with 28% of institutional investors.

Commercial papers also saw significant monthly funding at R$11.6 billion, accounting for 35% of the total in June. This result was due to a single company from the power segment, which sold R$9.3 billion of commercial papers.

Debenture issuances plummeted 94% from May (R$1.7 billion compared with R$28.6 billion), accounting for only 5% of the total raised. In the year to June, debenture offerings rose 9.3%, to R$84.6 billion from R$77.5 billion in the same period of 2018. As in the last three months, there were no issuances with these assets through Instruction 400, with all six placements being carried out under CVM Instruction 476. To date, there is no record of offerings with tax-exempt debentures issued through Law 12,431. Institutional investors held until June the largest share in debenture public offerings, with 63.48% from 57.5% a year ago.

In the foreign market, there were two fixed-income transactions, with bond sales of Ultrapar and CSN, totaling $675 million. In the year to date, the amount raised abroad totals $12 billion, little changed from a year ago at $12.3 billion.