In May, the higher volatility of financial indicators increased investors’ risk aversion and shrank transactions in the capital markets. The most used asset in May were debentures, with a R$3.3 billion volume, followed by Real Estate Investment Funds, which raised R$2.3 billion. No offerings were carried out on the stock market, a different picture from April when the first IPOs of 2018 took place. The volume raised in May showed a significant reduction in relation to April, totaling R$8.2 billion compared with the R$26.3 billion in the previous month, mirroring the deteriorating business environment in the period.

The monthly volume of debentures issued did not surpass that of May 2017, which saw offerings totaling R$4.9 billion. Among the total of 11 transactions, all through CVM Instruction no. 476, the highlights were the bond offerings of industry and commerce Cálamo, which raised R$700 million; and of transport and logistics Concessionaire of Lines 5 and 17 of the São Paulo subway system, with R$600 million. As for infrastructure bonds, the year-to-date amount issued reaches R$8.2 billion compared with R$1.8 billion in the same period of 2017.

Corporate domestic fundraising up to May already amount to R$73.4 billion compared with R$52.4 billion in the same period of 2017. Of this amount, R$60.5 billion were raised through fixed-income instruments; R$6.9 billion with share offerings; and R$6 billion with Real Estate Investment Funds. In the foreign market, also up to May, financing transactions reached R$38.9 billion, lower than in the same period in 2017 (R$53.3 billion). In this case, all the volume raised overseas so far in 2018 has been through fixed-income assets. 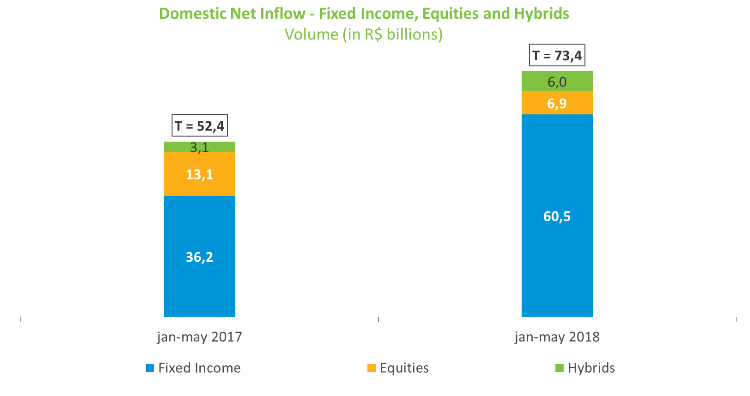